From the Manufacturer: For 5000 years, noble Optimus Prime has led the Autobots in defending their friends against the Decepticon empire. To Optimus Prime nothing is more important than preparing for the final battle between good and evil! To that end the Autobot leader has ensured he is ready for any situation, from open combat to stealthy covert operations! Optimus Prime has undergone his most dangerous and awesome transformation yet, to that of a semi-truck promoting Christian jingoism!

No one, including the evil forces of Megatron, will suspect that the savior of humanity hides in this ubiquitous, easily ignored semi-truck. Like the real world “Jesus Christ Is Not A Swear Word” trucks that are typically over-looked by millions of people daily, you can have hours of play fooling Megatron by hiding Optimus Prime in plain sight by parking on highway overpasses and in the lots of bankrupt shopping malls! But unlike most of the followers of useless Bronze age platitudes and oppressive belief systems Optimus Prime is always ready for action! Beware, evil! Optimus Prime and his Autobots don’t act on faith, THEY ACT!

In these three pages from 2011’s collected Supergod, Warren Ellis and team explains humanity’s primitive, irrational, silly, self-destructive and self-limiting need to create deities and believe in superstition. Personally I am glad we are slowly yet surely outgrowing that horrific aspect of our continued existence.

Like Loading...
It’s not advertising spam and scams that has me moderating the blog, it’s this loony crap and things like it in a barrage of replies to multiple posts. I could almost put up with the content if it was in reply to a relevant entry.

In between lulls at work the clerks and cashiers, instead of doing prep work or cleaning, often stand around and chat. Eventually, one conversation veered into one of the taboos of workplace interaction: Talking about religion or politics.

Last year a clerk and cashier, who here I will call Cindy and Julie, began trading stories of their brushes with the unseen world. I was kind of half-paying attention while I audited the money of a cash drawer ensuring money coming in and going out balanced.

“I saw a ghost, once, too! It was so weird and scary. Yet somehow, I felt that I was being reassured.” Cindy said.

Julie’s voice became excited. “I know! See, I always forget to clock out for lunch until about a quarter after. Guess when my Grandma died? 15 minutes past two! It’s like she is here telling me something.”

Listening to their exchange caused me to roll my eyes so much I had to recount the cash. Without realizing it I was laughing. It took a few moments but Cindy and Julie realized I was amused by their conversation. They stopped their chat and directed their attentions towards me.

“You didn’t see any ghosts. There are no such things.” I said, going straight into JREF-mode, still chuckling. Usually when I am exposed to an adult talking about the supernatural as if it were real I’m just kind of sad and disappointed. But today for some reason I found the idea hilarious. I tried to come off as rational and not condescending. I wasn’t very successful at the attempt. When the two repeated that they did see and experience a supernatural event I replied. “No, you didn’t.”

“Are you calling us liars?” Julie demanded. They were both becoming upset. I always have some prepared  statements in the mental file. The argument I put forth was perhaps lacking in tact itself. My mistake was in assuming the pair were open for a debate.

“You are either making it up, making connections where none exist or you are deluded.” I said. “Magic and the supernatural absolutely does not exist. If it did the evidence would be overwhelming. It would be everywhere. No one could dispute it. Without exception it’s all someone’s personal opinion. If it was factual, if it was real it could be recorded and measured in a form other than anecdotal.”

Julie leaned forwards toward me as if to emphasize he words even though we were several work stations apart. “Oh.” She said. Her voice was ripe with scorn. “What are you…an Atheist?”

That’s exactly how she said it. I could actually hear the italics. Total emphasis on the disgust. Yet what I took from it is she just wanted an uncomfortable conversation to end. It did, not because of the attempted put down or because she had an epiphany but because customers started walking up with their groceries to check out. For the rest of the day they both acted chilly and would not talk to me unless they had to.

Cindy let it go by the end of the shift, displaying a cool shoulder towards me probably in a show of solidarity with Julie. Cindy is young and has presumably has access to the internet so there is hope for her. I was over it immediately. But from then on Julie remained stand-offish and treated me like I had the plague. In her job as a manager, the same as I but with her possessing slightly less seniority, she would not address me unless she had no choice. Julie would call an adjacent work station and have them relay requests or instructions. She would not directly interact in person and would move people around to make sure she was a far from me in the row of check stands as possible. Sometimes she would swap 4 or 5 people and their duties around so she would not have to herself personally relieve me for breaks or for shift changes. If she was the designated person in charge of the shift that day I was passed over for opportunities or tasks that traditionally would be mine or excluded from the process of decision-making.

For my part I certainly didn’t hold it against Julie that she was a believer in the Unreal. She was competent at her job and that’s where my concerns ended. Julie was one of the few I worked with who did not adhere to the Culture of Half-Assedness that exists in so many work places. But Julie made it clear she had washed her hands of me. Julie employed a somewhat subtle form of marginalization and discrimination but it was there. It was particularly noticeable when comparing our work relationship as it existed prior to my taking on the role of Ghostbuster.

Julie used to ask my advice on how to perform certain tasks and duties. I was glad to help. She was one of those managers who because of tighter economic times was given minimal training and dropped into the job. It wasn’t her personal failing if she hadn’t been exposed to or given the opportunities others in her position had. Whenever she expressed frustration and not knowing as much about the job as other managers I let her know there is nothing wrong with that, just keep asking questions until you know everything. Something she accepted and I would presume appreciated at least as far as the job went.

In hardly any time at all I went from being a co-worker to The Enemy. If Julie had been in a higher position of authority or had more influence with the upper echelons of management it could have presented me with a problem that could have easily affected my employment. Not from our original conversation about ghosts but due to her trying to force me out of a job solely because I was, in her view, not fit to be around her sort of good people. This discriminatory practice against the non-devout and those with religions not in the mainstream is not rare and in some cases can be quite overt and extreme. Employment can and has been negatively affected. When Julie was transferred to a new work site it was a relief only because her behavior was getting hilariously absurd.

To this day I don’t know what her personal religious beliefs are. I could hazard a guess based upon her actions and the way I was treated by her but I don’t want to speculate. I require evidence. 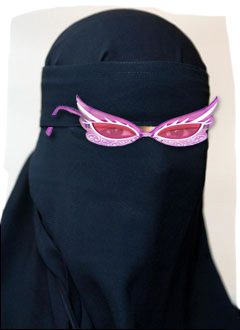 In what will surely be a boon to fashion houses and the international economy, Saudi women with attractive or tempting eyes may soon be forced to wear concealing sunglasses. I have no doubt that right this moment there are executives from eye wear manufacturing companies everywhere dancing on their chairs, high fiving each other and scrambling to get prototypes approved for export.

If the resolution passes and concealing eye wear is a mandatory attire for Islamic women how long until some wingnut pundit declares that wearing sunglasses is un-American?

Well, at least if America sells spectacles to the middle east the most we have to worry about is getting re-gifted a scratched pair of Oakleys. That’s an improvement over the the guns and bombs we export that later get used against us. 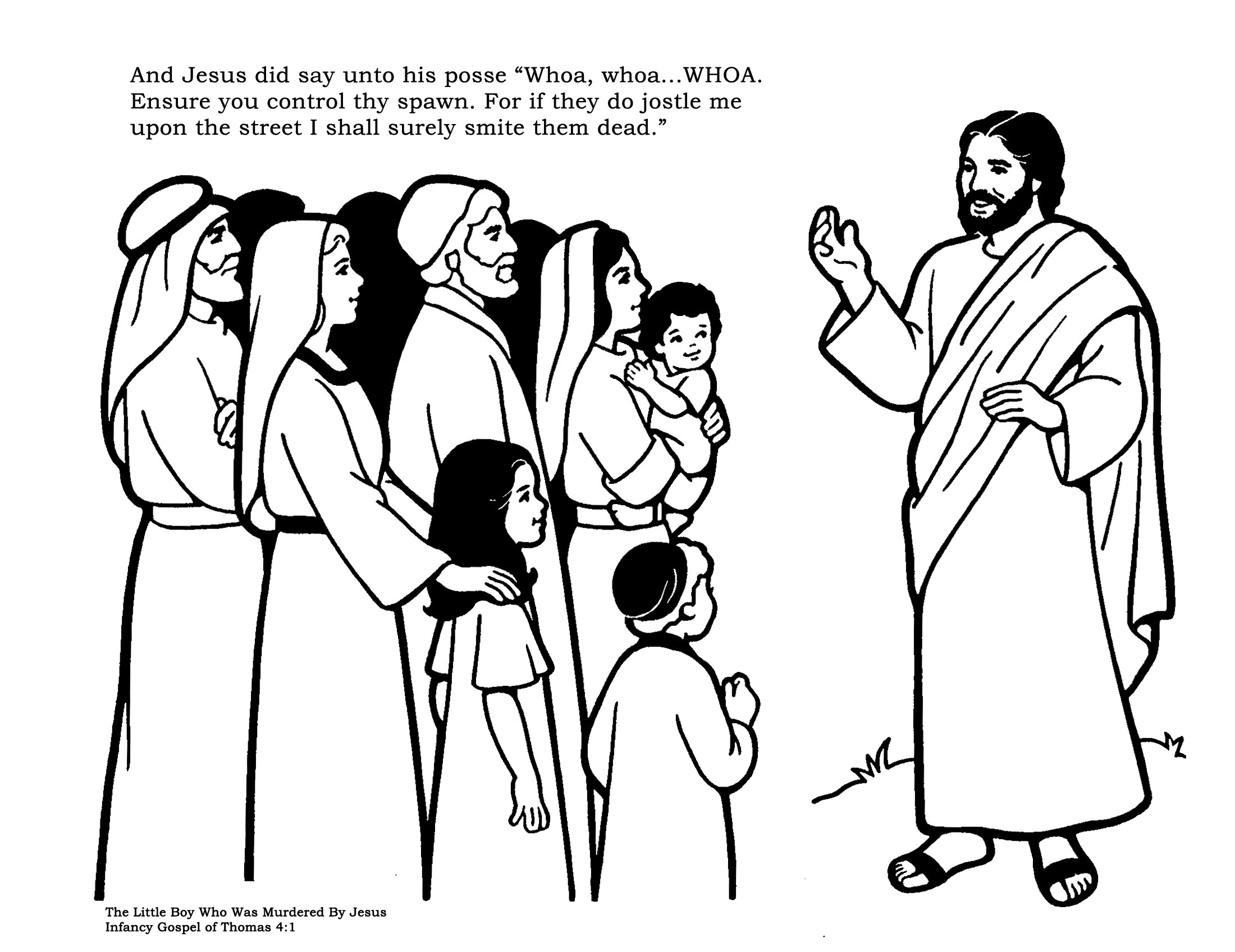 Apologetics try to forget the fable from the Infancy Gospel of Thomas 4:1 of a boy murdered by the Son of God for being innocently disrespectful of a King. A very valuable tool of control was creating out of whole cloth a culturally relevant history to teach people they better not dare to oppose their Earthly masters and remain slaves under the yoke of oppression. It is an old and continuing trick. Rebels will suffer God’s Will and be destroyed by magic or through His proxies, people with knives, stones and clubs if they do not fall in line. Life was hard and cheap 2000 years ago. Everyone in a village working hard for most of a 24-hour period meant a person might get a full meal if they were lucky. Fear of punishment or death from righteous torture via the Church or for the more gullible, divine wrath, was a way that the parasites of any community, the religious leaders, got away with not contributing anything to society. 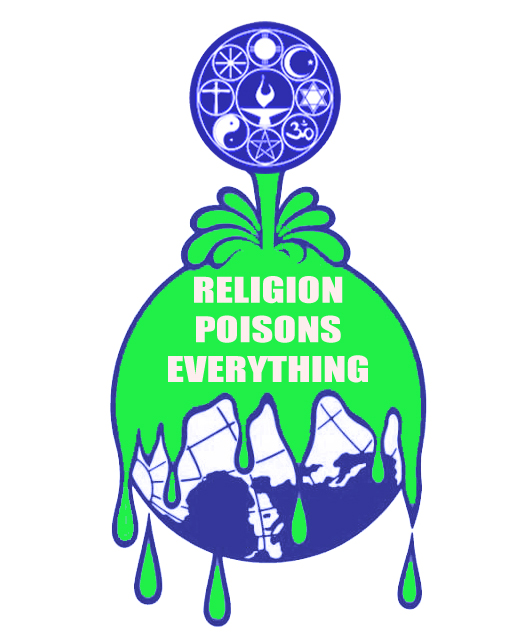 “Oh. Don’t you think I should buy something else?”

“I guess. If you are gullible and dim-witted.”

“The total of your order is not six six six. It is six POINT six six. Even if the number you fear wasn’t mistranslated from fictional text and actually held some sort of magical power it isn’t exactly the same. The decimal makes all the difference. So…Still want to change the total?”

“Okay! And would you like to make a donation to fight prostate cancer today?”

“Okay! Have a nice day. Thanks for shopping at HayleyMart.”

It is bizarre that customers lose their crap, scream, throw things, phone-bombard the corporate office and twitter-rage when a cashier opens up an additional register and they were not first in line but not when they are put in a position to shift a personal paradigm. Maybe it is the thinking that makes all the difference. 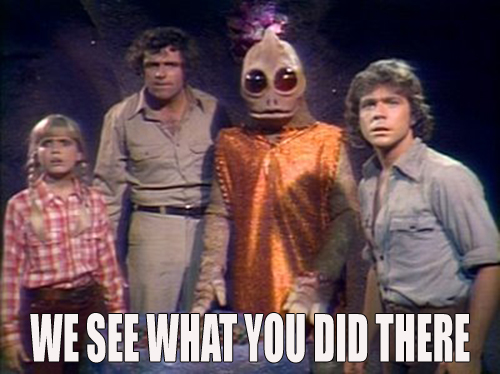