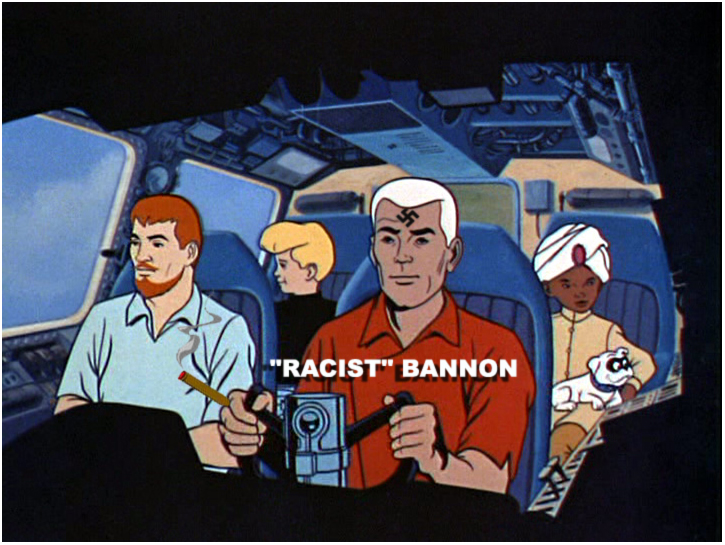 The character of “Racist” Bannon in the 1964 animated Johnny Quest adventure series was quickly re-imagined when he didn’t scale well with focus groups.

On this lazy Sunday here’s some more Korean pop music I’m familiar with only because they play on the televisions (alternating with sports) that provide atmosphere in my favorite Korean restaurant in San Diego. As ever it is the choreography, costumes and set changes that drives these videos almost as much as the catchy tunes.

Rainbow – Sweet Dream (2011): I have no idea what they are saying but it has a good beat and you can dance to it. As one video commenter puts it, “Twinkle, twinkle little star. How I wonder what you are” fits the bridge just right.

SISTAR19 – Ma Boy (2010): This K-pop entry is really hot and sexy and not part of the reserved Korean image I remember from the 1980s. Wow to this. I doubt the positioning of that monkey arm was a coincidence. Marketing!

Secret – Starlight Moonlight (2010): This group is just 100% Hayley Mills-level adorable in this video. They are incredibly cute in this, but not all of their videos have them appearing so sweet and innocent. This music video looked ridiculously expensive to make.

Like Loading...
I’m pretty sure I wouldn’t recognize South Korea if I visited it again. When I was there almost no one had internet and now it is one of the most connected countries on the planet. My impression of the country was that a person could walk a mile and the landscape, lifestyle and technology would change to resemble anything from 1930s American Heartland to the 1980s and back again all within a comfortable stroll. From new pictures I can see that many of the cities are completely transformed.

The popular music I heard while out was more often than not self-produced, self-promoted and self-distributed and the bands commonly consisted of a small electric organ with pre-programmed bossa nova beats. One of the interesting things to watch while I was in Korea was the evolution of rap and rock music. As restrictions of an oppressive government eased and Korean youth could speak out they did so angrily through their songs, though more polite by several degrees than the urban American inspiration that shocked so many people.

Watching the slick, corporate-owned and high production values of some of the newest Korean pop groups is something of a shock since all I recall are stiff, rote performances to a cassette tape playing on a chair next to the performer. There are few surprises in the music videos though and all pretty much follow the standard themes familiar to anyone born after the 1980s. The girls are cute, bouncy and sexy (very few affect a public street or gangster persona though this is changing) and rapid changes in costume and sets are the rules. A lot of cosplay costumes are involved though I’m sure this is what producers are confident that the audience wants.

The male performers in videos are usually depicted as living large and horribly tortured by emotion, definitely appealing to teen girls. The videos are hilarious because of the overwrought scenery chewing of the performers. I suspect focus groups or something similar dictate the format and themes of the music videos to an extreme perhaps more than their American counterparts and that these groups are similar to the heavily-managed and manufactured boy and girl groups of the American 1990s music scene.

5 Dolls is a typical Korean girl bubblegum pop group featured in a video with a comic book layout theme. Kind of fun and a little daring.

On the male side is So Goodbye from the City Hunter television series soundtrack and it’s pretty slick. My wife is addicted to the show and many others that are not fun to locate in the US but she enjoys immensely. Being a good husband, I focus on procuring Korean films and television nearly as much as I do gathering Hayley Mills memorabilia.

Like Loading...
The much-covered Working Class Hero from John Lennon (1970). The song has a curse word in it so don’t be stupid in a place you shouldn’t be.
A hard-working Sunday post.

Me and Hayley sitting in the backseat cruising with some pals, listening to some tunes on the 8-Track.

Here is the band Prefab Sprout with their 1986 shout out to Hayley Mills, Goodbye Lucille #1 more popularly known as Johnny Johnny.

Still in love with her? Perfectly understandable. Who isn’t?

Like Loading...
Well, everybody is still here, unless only two or three people world-wide qualified to be taken to Heaven and no one misses them. To mark the occasion of absolutely nothing happening I present the lovely voice of Maureen McGovern singing The Morning After, an uplifting tune about hope against a backdrop of disaster and horrible death by drowning from the 1973 film The Poseidon Adventure.
I really hope someone pokes into the Rapture Guy’s finances. I’d be curious just how much cash the dude raked in from the gullible, scared and stupid. I just hope no one killed themselves or any others in fear or anticipation of the 21st of May.