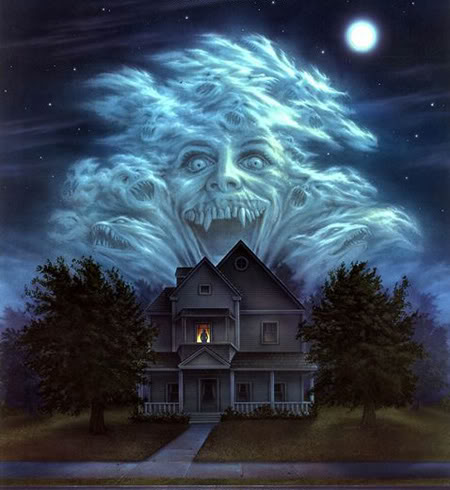 What is the most terrifying piece of cinema ever created?

Was it Frankenstein? The Ring? Dawn of the Dead? The Blob? Godzilla? That episode of Trilogy of Terror with the doll? Some have voted Psycho or the Exorcist as two of the most frightening movies ever made. Alien is right up there near the top as its theme of infection and horrible death resonates with people.

But for my money most films are too transparent in their gore or attempts to shock to be truly frightening. Subtlety was often lost as film technology allowed creators to show in graphic detail what film-makers of the past could only hint at. While the immediate payoff and shock value rose the true fear, that of the unknown, waned. One over-looked “Master of Terror” who understood that horror usually requires some subtle direction is from Warner Bros. Studios and he worked exclusively in the animation department. That director is none other than Chuck Jones of Merrie Melodies and Looney Tunes fame.

Along with a crew of talented creators Chuck Jones helped produce for the movie theater market one of the scariest 7 minutes of film ever made, the animated short Claws For Alarm, featuring Sylvester the Cat and Porky Pig. Originally presented en masse to unsuspecting children during movie matinees in 1954 the film probably caused untold thousands in steam-cleaning bills to theater seats after each subsequent showing.

See for yourself at this link for those who can’t detect the embedded video: Claws for Alarm

Claws For Alarm is actually a remake of Scaredy Cat (1948) and absolutely nails it by keeping the horror elements less obvious. Viewers may find the plot of Claws For Alarm familiar as later films have presented similar themes most famously the 1973 and 2011 creep-fests Don’t Be Afraid of the Dark.

In the Brightest Day Aftermath mini-series The Search for Swamp Thing, John Constantine is puzzling out why the new Swamp Thing, this time around hosting the spirit of Alec Holland is acting like an Eco-terrorist and not the more neutral “Guardian of the Green” he is familiar with.

After returning from being exiled in space as an unintended consequence of an assassination attempt, ST attacked and killed almost all of those responsible for the attack. All of the deaths were ironic or horrific in nature a la The Specter but the following pages from Swamp Thing #63 (August 1987) are the most grisly.

Prior to “The Anatomy Lesson” the Swamp Thing was a character that things happened to. He was a spectator and often a victim. Afterwards he was a bit more pro-active and became less the warm and cuddly cabbage patch doll. This time the difference is that the spirit of Alec Holland might be a bit peeved at being murdered and is lashing out (even though Alec eventually found peace over the course of several stories). The result may be a nut-job spirit that needs to be exorcised from the Swamp Thing.

All the evil the young model perpetrates in her life is reflected in the images of her on billboards. Her physical body and face untouched, eternally youthful on the exterior but rotting and festering within.

Here is the Chihuahua standing over the carnage of his favorite toys. He has about 10 of these cat toys scattered around the house. The toy bird chirps when moved so it keeps him occupied from time to time with something to play with.

Since the pooch isn’t a chewer we don’t worry about him ripping the toys open and swallowing the motion activated chirping device from the inside. He really prefers this toy over all the others.

On occasion he goes on a little Chihuahua rampage and stalks, attacks, “kills” and brings his victims home to the living room. To his little doggy brain these birds are representative of actual captured prey and in his view a really impressive ten minutes work. After his “kills” are gathered up and placed into a grouping he stands protectively over them and howls, proclaiming his victory and alpha-status as a provider for the pack.

It’s a lot less amusing and cute at 3 a.m. in the morning.

This image doesn’t appear in the story but still, good on artist Jim Mooney.

My 1994 Geo Metro just passed 200,000 miles. It is now officially a zombie-car. If it dies anytime in the next 6 months I am hosed. Without transportation three people will lose their jobs and one of those three will also have to drop out of college.

How’s that for scary?