Say what you will about the MS OS, but it worked well enough to detect bugs in other operating systems not connected to mine and shut down for safety reasons. 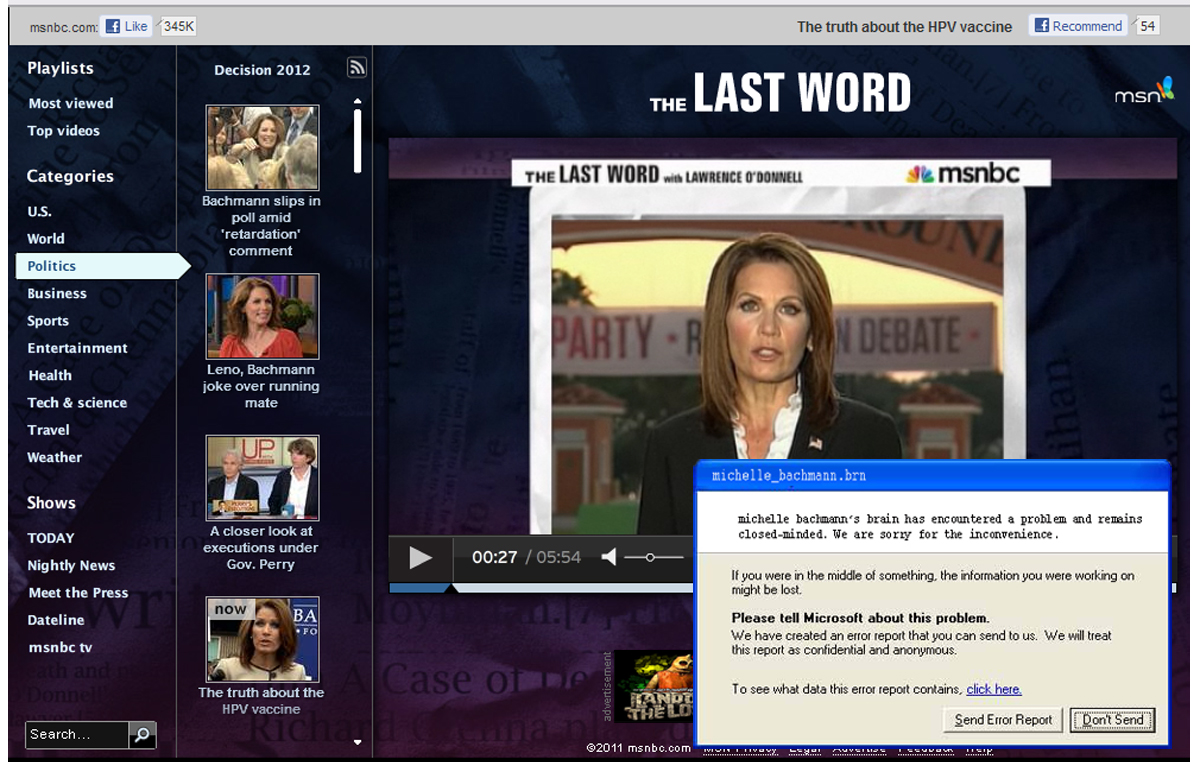 Ironic that only science could repair her problem.

With the recent news that even more parents are declining to immunize their children against preventable diseases I have created the first ever TYMAGA Award. What is the TYMAGA? Well, TYMAGA stands for Take Your Money and Go Away and it goes out to those rich, powerful, famous or infamous that abuse or misuse their position or entitlement to make things worse in the world we live in. When those people, entities or companies know, or should know, better than to do the things they do but still endeavor to make any situation worse then they get a TYMAGA. The TYMAGA is a plea to stop it, just stop it by withdrawing from the public dialog for a while, roll around on your big pile of cash and give us all a break.

Anti-Vaccination advocate Jenny McCarthy is the first person honored for a TYMAGA. Why should Jenny McCarthy pick up her bags of money and depart the public consciousness? Why pick on her? Jenny is not the only person out there wrongly speaking out on the dangers of vaccinating children. Primarily, it is her influence as a celebrity coupled with her steadfast adherence to junk science and support of discredited anti-immunization studies. Simply put, many people believe that vaccinations could and do cause syndromes like autism in children. Jenny McCarthy promotes not immunizing children using certain methods because of alleged negative reactions to vaccines. She is part of a movement that has had the effect of seeing a resurgence in formerly rare childhood diseases that in some instances resulted in death. One of the main problems with the anti-vaccination movement is that much of the evidence they base their decisions on originated in a thoroughly discredited study. Sadly the onset of some of these diseases and fatalities could have been prevented through routine vaccination and probably would have if not for Jenny McCarthy and her ilk supporting the study.

Over the last several years Jenny McCarthy has managed to avoid sinking into the bog of obscurity most celebrities fear drowning in by attaching herself to anti-immunization hysteria. Jenny McCarthy has remained one of the most influential spokespersons advocating not vaccinating a child long past when people should have recognized that the supposed risks of preventive health are far outweighed by the benefits. But Jenny, who uses her far-reaching platform of celebrity to misinform the masses and stoke fear in the stupid and gullible, remains steadfast in her support of discredited research and fraud. To lead people to believe that a child contracting and spreading to others measles or whooping cough is preferable to getting preventive medicine that almost no one in scientific circles believes will cause an undesirable side-effect is sadly negligent if not criminal in nature.

Her adherence to the cause is perplexing. Surely she has seen evidence the vaccine study that initially created the controversy was overturned and the person most responsible has had his license to practice medicine stripped away? Why then is Jenny not able or is unwilling to reverse her stance? Is there a reason she is not willing to accept the facts? Would doing so devastate and alienate her victim-hood worshiping fan-base? Would it invalidate her own sense of self?

Look, Jenny, you may have been fooled just like a lot of people were. Your personal situation may have blinded you to the fact that data was manipulated for money. That was then. It’s been a few years since the study was discredited. I don’t think anyone wants an apology from you, just acknowledge that everything you have advocated up until then was based on fraud and new information has allowed you to revise your position. This is a chance to change your mission and use your celebrity for good instead of perpetuating the damage. Check into the science yourself. If you don’t understand it, have someone (more than one, preferably) respected and accredited in the field explain it to you and your organization.

It is incredulous that in spite of all the facts you continue supporting something that has almost no evidence, that certain immunizations cause autism. One would almost think money is the reason for your unwillingness to break from the anti-vac movement. Hopefully not, as that would make you a terrible person in light of your personal experiences. You probably had money before joining the cause, you probably will have money after you leave it. No one should begrudge you making a good living. But are you so lacking in confidence that you believe you have no other options left for a career other than supporting ignorance and exploiting worry and fear? If so, you are no better than the psychic that preys on a wealthy widow.

So, Jenny McCarthy, until you do the right thing do us all a favor and move somewhere sunny and exclusive far away from us and shut up so you do no more harm. Just please…