Even without counting Metallo, who is technically nude (Hey, sexy robot women count, why not men?), Bane and the Evil Martian are showing about the same amount of skin. But let’s face it, there are some basic differences in the way these costumes are presented. The togs of Star Sapphire and the Cheetah are designed to be sexy and titillating as a  typical male fantasy fulfillment. The clothing of the men are not to excite but meant to display power and prowess albeit of the “Jersey Shore ab-display” variety.

On the plus side Star Sapphire is depicted as having more fabric in her outfit than the comic book version but that probably has more to do with the standards and practices of a video meant for a somewhat younger audience. 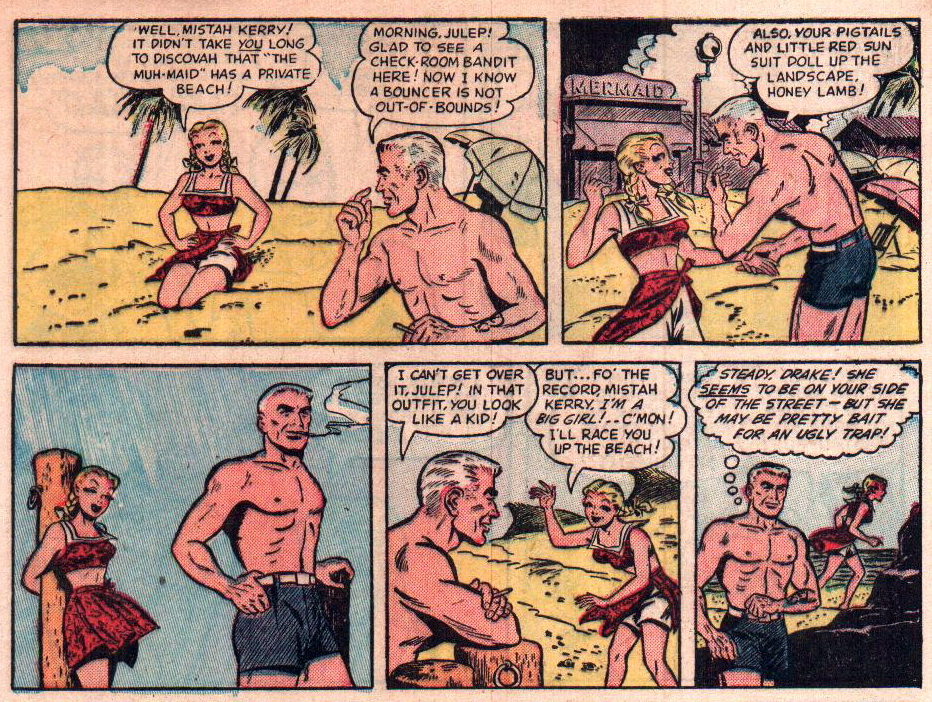 I’ve long maintained that the creative teams of comic books, chafing under restrictions of the pre and post-Comics Code era, took extra pains to include imagery and situations that managed to sneak in under the radar of the editors and censors. Quite a few examples can be found in the 1955 issue of Chamber of Secrets #28. The entire story is rife with Lolita-ish situations between the seemingly under-aged Julep and the much older hero, Detective Kerry Drake. In the above sequence of panels the artist managed to not only ensure that Julep showed her underwear (technically, part of her bathing suit ensemble) at nearly every opportunity to the audience and Drake, but also managed to sneak in a faux-bondage scene in the third panel that is oddly bereft of dialog.

The entire story jumps around a bit and the the tale of how Kerry Drake smashed a smuggling ring is not as interesting as the rinteraction between Julep and the Detective. The following panel of Julep and Drake, after a make-out session on the beach (to fool a gang of smugglers into believing the pair isn’t snooping), definitely gives the appearance of being in the inappropriate relationship category. 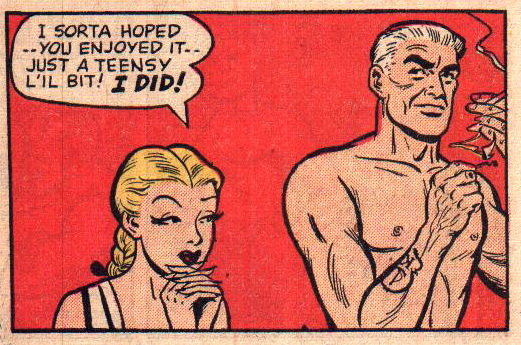 While not being privy to the creation of the ad copy for this mini-camera from a 1958 girl’s romance comic book it is hard to believe that the following sales point for the camera was meant for anyone other than emerging pervs or creepy adults. It is possible that it was totally innocent but the sleaze-factor, combined with the explosion of “camera clubs” during that time period leads me to doubt that the camera was meant just for laughs.

In case you can’t read the copy it proudly states one of the positive features of the small, easily-concealed camera is:“Your girlfriend and other bathing-beauties will all relax in their natural pose and make a swell pin-up collection. Through a paper is just one of many ways to go about it.”

I don’t know the provenance but this memo was supposedly sent out to the creative staff of the nascent DC Comics by editor Sheldon Mayer as a list of what is and is not permitted concerning content in comic books. It is undated but would have been issued sometime from the late 1930s to late 1940s.

It’s no wonder he sleeps alone. This one-pager from Feature Comics #135 was published way back in June 1945, a time when comic books were not for girls!

Been looking for this cover for a while, finally found it via.

Like Loading...
Burning skies, toxic, sulfurous clouds, the tortured souls of innocent forest creatures forced to consume the scalding contents of hellbound pic-a-nik baskets as Satan gleefully enjoys the spectacle…Yes, they are dead and in hell, amirite?